This dialog as well as the menu item and the toolbar button with which it can be opened are not available if the Rails Connector is used and the preview of your Rails application has been integrated into the Content Navigator. In this case the draft versions of the CMS files are displayed in the preview. If a file does not have a draft version, the released version is used.

You can choose one of three combinations of the versions used for the preview and other views in the Content Navigator: 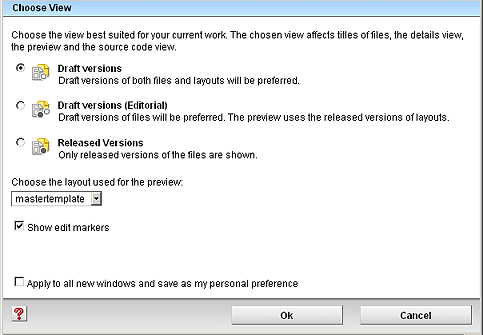 Drafts will cause released versions to be used as a replacement, if required. The reverse, however, is not the case.

The view modes affect the folder hierarchy (the titles displayed in it), the preview, the details view, and the source code view.

Layouts can include other layout files of any name. If such an included layout is missing, a corresponding message is displayed.

Apply to all new windows and save as my personal preference

The effect of this setting is that your choices are stored in your personal preferences and are immediately applied to the the current and all future windows. Otherwise, only the current window is affected.